Now let’s embark on the adventures of a time trip to 100 million years ago!

The tale of the earth and people linked by coal.

The modern history of Mikasa started with the unexpected discovery of ‘coal’ a gift from the abundant nature of the Horonai area in the first year of the Meiji era (1868).
With the discovery of coal, the “Horonai Tanko”, the first modern coalmine in Hokkaido was opened, and the “Horonai Railway”, another first in Hokkaido, was built to transport the coal. To mine the coal, a prison, the “Sorachi Shujikan”, was established, and here convicted offenders played an important role as laborers in the coalmine. Sorachi Shujikan was the only prison in Hokkaido which used convicted offenders as laborers in the coalmines. Around the geopark there are still many sites that were developed with the discovery of “coal” and show the history of the area. 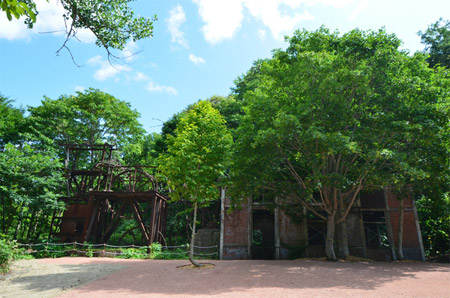 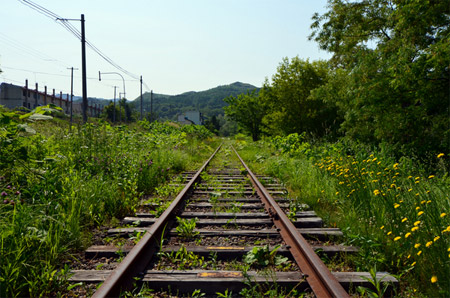 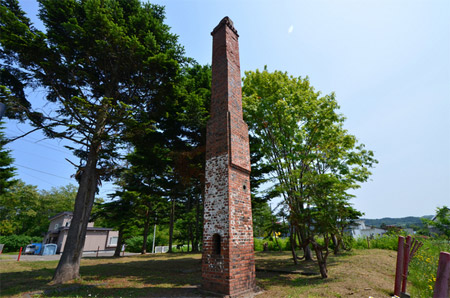 Brick chimney of the residence of the staff of Sorachi Shujikan

The history of the study of ancient extinct creatures including the ammonites of about 100 million years ago is closely related to the discovery of coal back in the first year of the Meiji Era. The discovery of coal led to surveys of underground natural resources in the undeveloped regions and the discovery of the coal beds in Horonai in 1873 (Meiji 6).
The survey was conducted by Benjamin Smith Lyman (1835-1920) of the Development Commission (organization established by the Meiji Government to develop Hokkaido) invited from the USA. Lyman conducted a three year survey of the geology of Hokkaido and published the first comprehensive geological map developed in Japan (1/2,000,000), “A Geological Sketch Map of the Island of Yesso, Japan” as the result of his survey in 1876 (Meiji 9). May 10 today is “Geology Day” in memory of the publication of this first geological map.
Later, in 1878 (Meiji 11), “A General Report of the Geology of Yesso”, which is an instruction manual for “A Geological Sketch Map of the Island of Yesso, Japan” was published. In that manual there is a mention that fossils of ammonites of the Cretaceous era, 100 million years ago, were excavated in the survey of the coal beds.
How did Lyman discover the fossils of ammonites of 100 million years ago while surveying 50 million year old coal beds? This is closely related to the geological features around the city of Mikasa.
Around Mikasa, the strata including the ammonite fossils of 100 million years ago are found right next to the strata that contain coal formed about 50 million years ago. In general, strata are layered with the older ones separated from the overlying younger deposits. This would make it unlikely for the strata of 50 million years ago to be right on top of strata of 100 million years ago.

One possible reason for this is that the missing 50 million years of deposits, which should have been here, was eroded away after there was an upheaving of the land in the 50 million year interval.
Another feature of the strata around here is that they stand almost vertical. Stratified deposits are formed when sand and mud deposit in water, mainly in river and sea beds, where they are initially horizontal. However, the ground moves little by little, and this movement bends the strata to make them vertical. 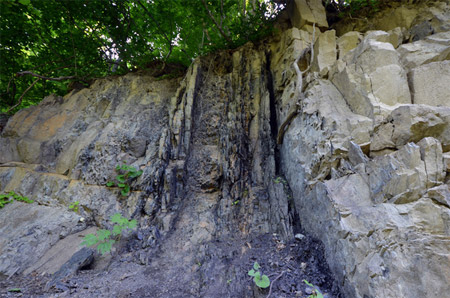 These strata were bent and became vertical as a result of a collision of the west (the Eurasia plate) and the east of Hokkaido (North American plate), which pushed the strata so they ended up standing vertically.

Because these vertical strata are everywhere around here, we can see the strata of 100 million years ago just one step away from the coal bearing layers of 50 million years ago. This may be the reason for the discovery of the ammonite fossils when Lyman was conducting the survey of the coal beds.
After the publication of the survey by Lyman, research into ammonites has become active in Hokkaido. Currently, Mikasa is internationally known as a center where fossils of this kind are excavated. 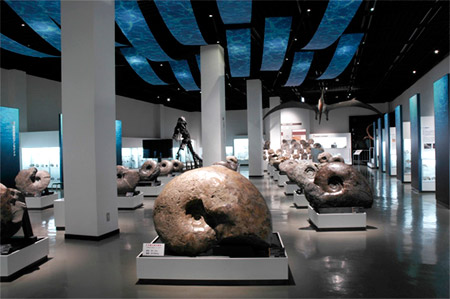 At the Mikasa City Museum, documents and materials related to creatures that lived 100 million years ago including ammonites have been assembled in the intervening years and today they are accessible in the exhibits.

The research into organisms living here 100 million years ago, including the ammonites, started with the discovery of “coal” and is closely related to the history of land formation of Hokkaido.
Mikasa Geopark offers a time trip from 100 million years ago when ammonites were swimming in the oceans up to modern times when the city flourished as a coalmining town. The “coal” discovered here led to the linking of the city of Mikawa to a history starting 100 million years ago. Enjoy the special occasion offered by the discoveries exhibited here.